日期：2018-08-07 15:10:49 来源： 浏览：次
I wrote last month about CEVA’s Dragonfly-NB1 platform, a single-chip IoT solution supporting narrow-band cellular communication; this can meet aggressive total solution price-targets for high-volume deployment, long-range access and the low-power needed for 10+ year battery lifetimes. That solution, based on Release 13 of the standard (also known as NB-IoT or LTE Cat-NB1) saw quick uptake across multiple use-cases. Meantime, opportunities to improve on the standard led to Release 14 (also known as eNB-IoT or LTE Cat-NB2) which now is quickly becoming the mainstream technology for narrow-band. CEVA announced their solution for Release 14 recently at the Shanghai Mobile World Congress. One feature of Release 14 will sound pretty familiar to low-power experts. Release 13 data rates were pegged relatively low to meet a low-power goal – at peak ~60Kbps – which you would think would be fine for the small data transfers expected in these applications. However, we often see that net low energy is better served by running faster and stopping sooner. This is particularly true for narrow-band cellular where the power amplifier is the biggest power hog. So Release 14 bumps peak rates by as much as a factor of 3; faster transfers and the battery lasts longer!

Another key extension in Release 14 is location support. Here, let’s start with why you would even want location-awareness in an IoT device. For some applications the need is obvious: asset tracking and child-tracking watches (big in China apparently) are examples. But did you know that location-awareness is also valuable in parking meters and street lights, applications not known for mobility? The reason is subtle. While each such device will stay put for its useful life, the system provider and possibly network owners still have to record, at least initially, where the device is; for maintenance, perhaps for billing, for available parking location info and more. You could rely on human input for that data, or you can just take the human out of the loop to get reliable location data across potentially thousands of devices, especially given the small marginal cost to add this feature.

Location-awareness in Release 14 is based on GNSS (pronounced genesis), which is a constellation of positioning standards: the US GPS standard, China’s BeiDou, Russia’s GLONASS and Europe’s Galileo. I had originally wondered about the narrowband positioning reference signal (NPRS) capability in Release 14 as an alternate way to provide location, but according to Emmanuel Gresset (Director Biz Dev in the CEVA Wireless Unit), NPRS locations are quite coarse and are getting only spotty support among operators. NPRS may still provide value in some cases, but GNSS will be a clear leader for most applications. 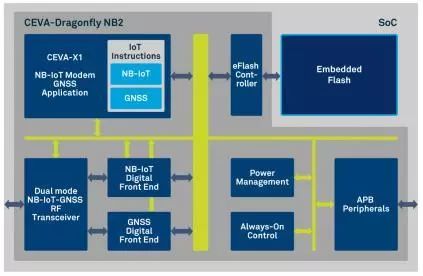 The Dragonfly-NB2 platform fully supports the Release 14 standard, adding GNSS hardware and software support (as an option) in the modem and the digital front-end. The system supports multi-constellation GNSS with software switching between constellations. CEVA have added instructions to the modem to more efficiently (speed and power) support GNSS so that supporting additional constellations just requires updating the software, which CEVA intends to keep open (the first release, from a 3rd party, supports GPS and BeiDou). And naturally it includes interfaces to connect USIM or eSIM for authentication, etc.

Dragonfly-NB2 continues to offer the advantages of NB1, providing all the components you need, including RF transceiver and power amplifier; just add embedded flash and sensors/sensor-interface and you have a single chip solution. You can run application software on the CEVA-X1 platform at competitive MCU performance in addition to supporting communication functions. CEVA have also added deep-sleep capability to further reduce standby power for that 10-year battery life goal. Emmanuel says you can expect to see full silicon-proven reference boards (with RF) to support application software design in Q3, based on both 55nm and 40nm processes.

Since CEVA are already well known for voice-based capabilities, they also offer voice-activation through their ClearVox software as an option. I’ve written about this capability in other blogs – voice activity detection, beam-forming support, noise suppression, always-on voice-trigger, command and sound detection. Imagine a medical alert system activated by voice rather than pushing a button, or a home protection system detecting the sound of broken glass.

This is a pretty impressive package – cellular communication, location aware, voice activation, ultra-low power. Is it overkill? Not according to recent survey information from Ericsson which Emmanuel shared with me (Ericsson Mobility Report 2018). Adoption of Release 13 + Release 14 is expected to grow at 30% CAGR through 2023, and Emmanuel expects Release 14 to quickly dominate this growth for all the reasons outlined earlier.

A lot of this is being driven by new systems entrepreneurs, like smart bike and scooter providers, parking space trackers, recycling systems and other rapidly-emerging solutions. Each is looking for differentiation in capability, through power, location-awareness, even voice-activation. And they’re also looking for differentiation in cost, where more are now going around the standard supply chain, wanting to squeeze price through single-chip solutions by working directly with IP and ASIC vendors.

So I’m guessing this probably isn’t overkill. Across the boundless range of possible IoT innovation, ability to pick and choose the capabilities you want, especially with hot features like voice activation (no need for panels or buttons), this looks like a great platform on which to build. You can learn more about Dragonfly-NB2 HERE.